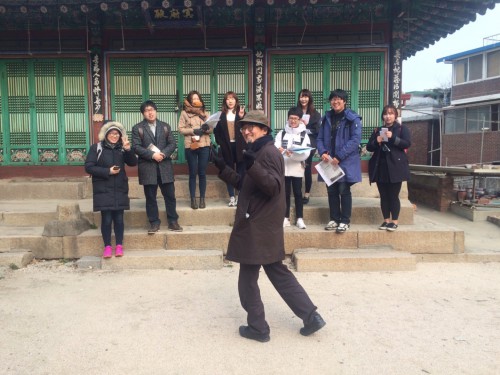 SKKU Urban Architecture Lab has been established since 1998 by professor Shin, Joong-Jin. We study in various field of urban architecture such as urban management and maintenance, urban residence and apartment housing, urban streetscape, regeneration of historic cultural area, maul-mandulgi through citizen participation, revitalizing of local community, regeneration of urban and region etc.

SKKU Urban Architecture Lab has been managed with diverse students and researchers for 18 years.
Our lab has progressed many projects and studies in various fields from urban management to community design. In these days, we are participating projects and study about urban regeneration through participation and cooperation of regional community. These cover not only environment improvement but also social and economic revitalization.

We have mainly learned from field centered projects as well as literature review.

The projects we are practicing are as follows. The research on the residents in Ikseon focused on the people, the place and the process. Renewing District Unit Plan of surrounding area of Ttukseom. ‘2016 Desired Area Project’ for revitalization of urban regeneration at Sinyeong-dong
(Desired Area : This area means where was designated for reinforcing the resident’s capacity before designation of ‘Urban Regeneration Revitalization Area’ and ‘Residential Area Management Projects’) 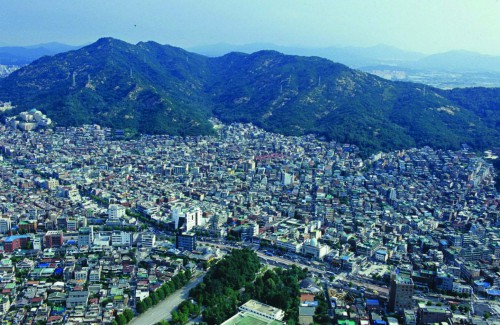 “Urban regeneration activation plan” has the nature of the action plan and it is trying to concentrate and link various business focused on “The place”. It has 4 to 5 years for planning and business enforcement. “Urban regeneration activation plan” for “Neighborhood Regeneration” has contents of “Urban regeneration business plan” for “Strengthen local capacity”, “Local economy activation”, “Development of environment”, etc. And also it has contents of “Strengthen local capacity by community activation”, “Operation of relative groups” for “Establish of urban regeneration base”. So, by “Urban regeneration activation plan”, planning of public business (physical or non-physical) is available, and link and use of other business based on other act is also available.
“District unit plan” is “Urban management plan” which plans for systematical management of the buildings and the other facilities. It has 10 years for planning and reorganizing for every 5 years is also available if it is needed. “District unit plan” has contents of “Public and Private sector plan through forward-looking of the area” and “Applications, Compartment, Floor area ratio, Incentive, Height, Placement & Shape of the buildings, etc.” are planned as “Architectural design guideline” and “Resident agreement” in detail. 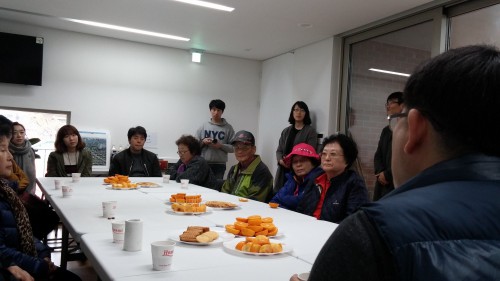 To analyze the phase of process in terms of “Urban regeneration” ‘s sustainability, we extract the method of ensuring “Urban regeneration” ‘s sustainability from previous research, and use it as the analysis indicators. The analysis indicators are “Local resident’s empowerment and participation”, “Integral of physical, social, economic regeneration based on locality”, “Composition and operation of cooperation system between relative groups”, “Establish of urban regeneration base for link business and enforcement”. The phase of process is separated to “Area decision”, “Planning”, “Enforcement”, “Maintenance and management”.
From “Area decision” phase in “Urban regeneration activation plan”, we gather “Opinion of residents”, “Local research” and “Review of administration’s capacity”. On the “Planning” phase, we make “Strengthen local capacity”, “Establish of regeneration plan”, “Composition of cooperation system between relative groups”, “Administration supporting business’s apply plan and funds supporting plan for enforcing business plan”, etc. On the “Maintenance and management” phase, we manage sustainable maintenance and management through the foundation before it is established.
On the “Area decision” phase and “Planning” phase, “District unit plan” can be devised. “Public and private sector plan” by reflecting the “Locality of the place” and the “Opinions of residents”. In addition, it promotes the maintenance and management of the area through community organization before it is made. From the “Enforcement” phase, “District unit plan” can be managed and examined the compliance of the plan systematically through the “Urban-architecture joint commission”, “Architecture committee”, “Resident association” and the like. Especially, from the “Planning” phase, it can make the plan that is linked with various plans in surroundings. It can realize the “Public sector plans” through the “Public contributions” according to the “Pre-negotiation system”. 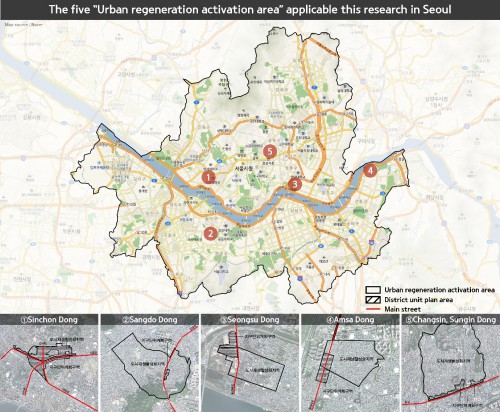 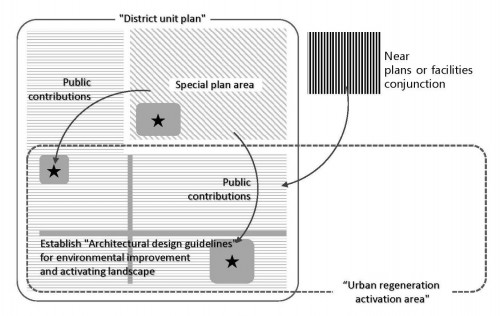 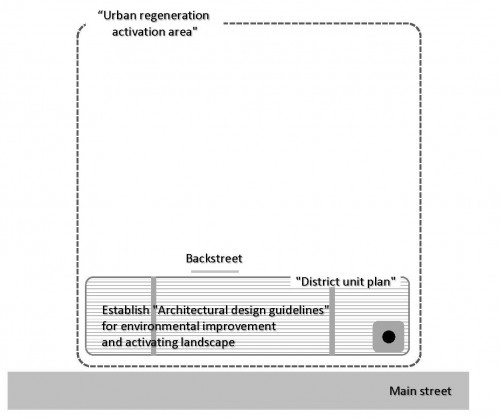 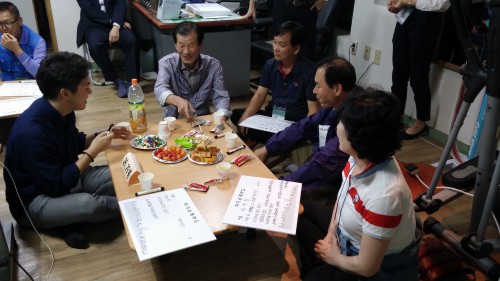 However, this study has limitations because it was researched by theoretical review and applied to a virtual area. So follow-up studies are needed to draw implications from a real-life case study.

The Research on the residents in Ikseon focused on the people, the place and the process. 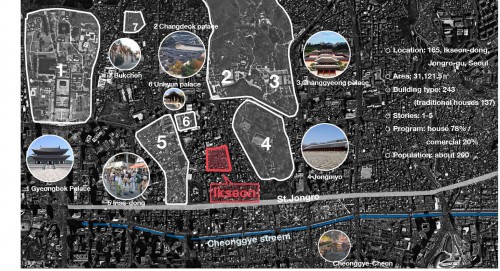 Ikseon is a small town in Jongro-gu, Seoul. It is located in the center of Seoul. Around Ikseon, there are so many famous places like Gyeongbok palace, Unhyun palace, Insa-dong which is famous old town, Buckchon and Samcheong-dong, traditional Korean houses towns, and Changdeok palace and Jongmyo which are important sites because they are world heritage sites. It’s surrounded in very famous places where enormous number of people visit every day in Seoul. But Ikseon didn’t become known until a recent date like a lonely island. 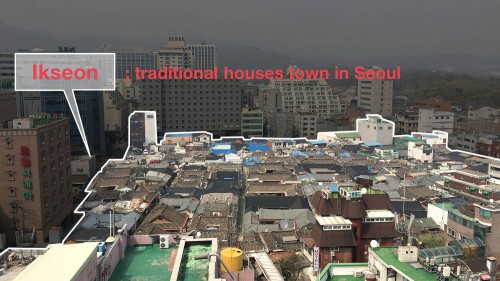 On February 28, 2016, it was introduced to people through ‘Documentary 3 days’. It’s a TV program about some places in South Korea. After broadcasting the program, hundreds of pictures and information about Ikseon were posted every day on Facebook and blog. Can you imagine why people are interested in this small town? It’s because Ikseon is a very unique and valuable town in Seoul.
When one of departments of Seoul City researched in 2008, it was revealed that Ikseon had the greatest number of Hanok, Korean traditional houses and even they are the oldest exiting in Seoul. In Ikseon There are so many Korean traditional houses that have remained for about 100 years.
Before just forty years, most of houses in Seoul were Hanok. But nowadays, it is very difficult to find out Hanok in Seoul. Around 140 Hanoks are concentrated in Ikseon. A Hanok in Ikseon is special because it’s a modern Hanok. It’s different a little bit with traditional Hanok. For example, traditional Hanok is composed with a house and a fencing which are separately standing. But in case of a modern one, outer wall is the boundary of the house. And the modern Hanok was built by modern architectural material like glasses, bricks and concrete. Namely, it is an unusual architectural asset. Ikseon is a complex of a modern Hanok that was built by Jeong Sekwon, who was the first developer in Korea. He constructed some Hanok town like Buckchon and Changshin-dong in the 1920’s. Virtually he has not become known as well. Nowadays, Citizens of Seoul find out an important fact and place.
However, for forty years most of Hanok in Seoul was destroyed. Because people thought old houses were not valuable and hoped to live new houses like apartments. On 20 centuries, the paradigm of urban planning in Seoul was “reconstruction”. A lot of Hanok towns were changed to a complex of apartments. So Seoul began to be called “the republic of apartments”. The Seoul government has redeveloped old towns to new ones by removing all over so far. In the early 2000s, Ikseon was also in danger like some cities. It was designated as Urban Environments Improvement District so it was planned to be pulled down over all.
On the 2000s, citizens realized that Seoul became uniformly and they lost neighbors who live together for long time in the same town. And people started to think the value of Korean old town unlike cities in other countries. Also, in the east side of Ikseon, there are Jongmyo, a UNESCO world heritage and three valuable heritages in Ikseon area. Above all, a path which was used water and sewage exists for more than 600 years. And another path was built in Chosun Dynasty. It was a Pimat-gil which people avoided to when the king was progressing. As mentioned above, after the declaration of Hanok in Seoul on 2008, one of departments of Seoul City reported the present condition of Hanok in Seoul, it was revealed that Ikseon had the greatest number of them. Because they are worth being saved, redeveloping project should be reconsidered.
So many traditional houses in Ikseon have been preserved so far. However, because they were not properly fixed, it’s quite hard to stay in that circumstance. The most of houses are humble and the street was littered with too much trash. Because old houses was planned to be demolished, owners of houses didn’t absolutely repair. 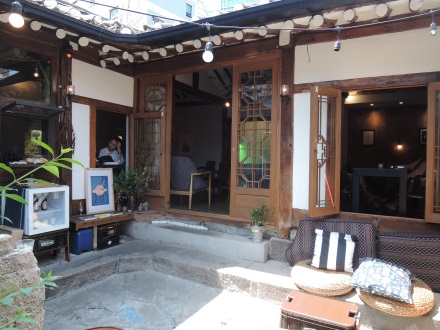 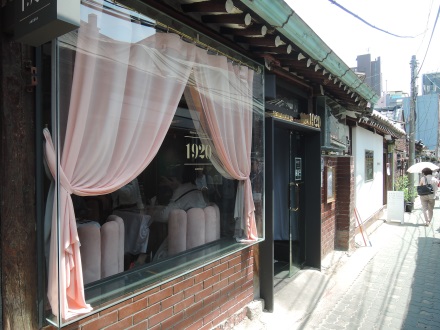 But the town began to change little by little in the 2010s. In the 2012, Sikmul, a gallery and café, was made by connecting four houses. It was managed by Luis Park, a photographer. He combined traditional and modern architectural style. It’s the newest style of architecture in Seoul. And the space designer team ‘Ikseondada’ was very impressed by the old town, so they also opened two restaurants, a guesthouse, a gallery & café in 2015. Besides, the young business people opened a pub, a photo studio and a perfume workshop by remodeling a Hanok. Some artists collaborate with the workshop, and galleries. Ikseon is a cultural center now.
These days, many people who are foreign tourists such as Chinese, Japanese and Koreans are coming to Ikseon for various attraction and food. There are two Hanok guest houses. Tourists like to stay in Hanok for experiencing Korean housing culture.
Also, the Ikseon is the place for not only the tourists but also the residents who have lived there for many years. They know many stories about the town and have their own stories in this town. History of the town is written by them as well as by newcomers. Some residents are managing the street for long days by gardening. She has lived for 30 years.
Nowadays, in Ikseon many events are happening. A flea market is being held every month on the street. Also, a theater company, ‘WWW’ put the play ‘Would You Like Beer?’ in a garden of Hanok. The story of the play was that the young met accidently in a guesthouse. The residents wanted to protect their Hanok in Ikseon, so they organized one group. And they made a Forum for preservation of Hanok on the April, 2016. Residents and professionals, public officials in Seoul participated. And they share their opinion to set an image of the future of the town. 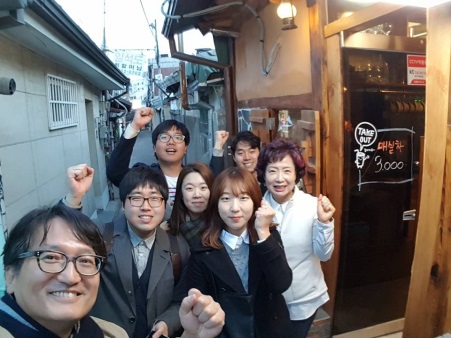 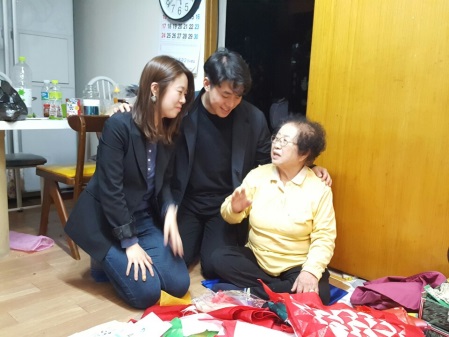 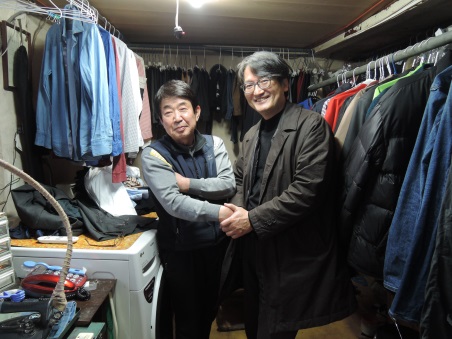 While Ikseon District Planning is being made for three months, from March to June 2016, the lab of urban and architecture of SungKyunKwan University (SKKU) is in the process and undertakes a project by meeting the residents and listening to them about what they want and need. If the urban management plan is established with residents’ opinions, the town could be maintained and managed properly according to the planning So the residents’ comments which we are listening to and considering are going to be reflected in the Ikseon District Planning.
So the lab of urban and architecture of SKKU started to interview people living in the town. We planned to meet all residents of the town and met about 100 people up to now. And we know that very various people live in Ikseon for example, newcomers, residents who live for long time, people who run a restaurant, a supermarket or a laundry, people who make Korean traditional clothing, jewelry designers, a possessed shaman, and sexual minority.
We think that a town doesn’t have just one characteristic. In other words, so many stories exist and various people are living in a town. The more we research, the more come out the history and events about the town. 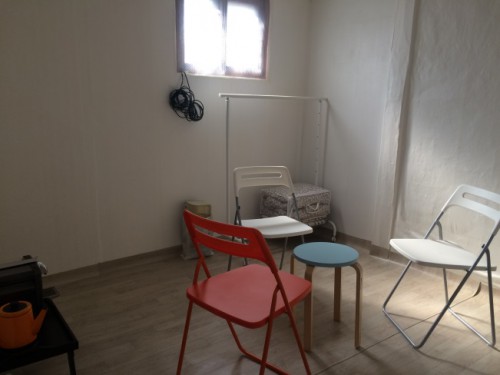 Whenever we meet the people and talk with them, we can understand their lives. And now we do love them and the place. For us, three months were very short to know all about them. So we decided to live in Ikseon for one year to be real residents and now we live in the Hanok of the town. Most of us are typical apartment kids born in the 1980s in Korea. For this reason, it‘s a meaningful event in our life. And we even named this place ‘The Neighbor’s Talk’. It means we always listen to their stories and record them for the history of the Ikseon. From now on, we’re going to experience the Ikseon’s four seasons and archive them. And then we will let many people know about their story.